The League of Women Voters held its National Convention in Denver and virtually from June 23-25.

The National Popular Vote movement started in 2006 as a catalyst to ensure the candidate with the most votes nationally is elected President. By continuing to use the Electoral College, states decide to have their Electors cast their state votes for the candidate who wins in all 50 states, not the winner in their state.

The League of Women Voters has supported direct election of the president since 1970, and the National Popular Vote as an option since 2010.

In all 15 states and DC, the state Leagues have been instrumental in getting the bill passed. State Leagues in other jurisdictions have varying levels of commitment depending on local membership preferences and scope.

In Florida we have a devoted team of LWV from around the state who support NPV by speaking to civic groups and legislators to ensure reliable information is disseminated.

“Electing the President by Popular Vote” was passed overwhelmingly by the delegates. We celebrate all the hard work and dedication of our League members from around the country who contributed to this year’s success. 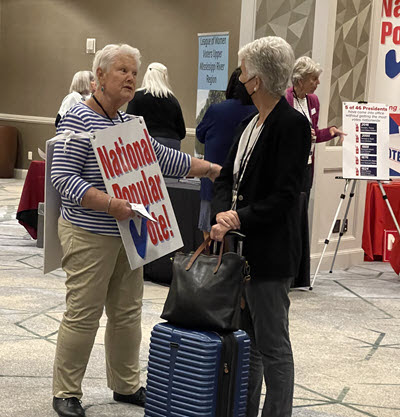 Congratulations to Kathleen R. Crampton the 2022 Emerald Awards honoree in the Go-getter category!! She is passionate about ensuring every vote counts and that everyone has the right to vote, putting that passion into action by founding Floridians for the National Popular Vote. She understands how to motivate people and work with a team to get things done.

We are so proud of Kathleen and her state-wide team of devoted volunteers who tirelessly provide their time and energy to educate the public and Legislators about the National Popular Vote law.