How the 2020 Census Results Effect NPV

In April, the census reapportionment data was released with Florida gaining one electoral college vote along with Montana, Colorado, Oregon, and North Carolina. Several states lost an elector, while Texas added 2.

Overall, the National Popular Vote bill, which has passed in 16 jurisdictions, lost 1 vote toward our goal of 270 for the bill to take effect. NPV now has 195 committed Electoral Votes toward implementation. Read more here. 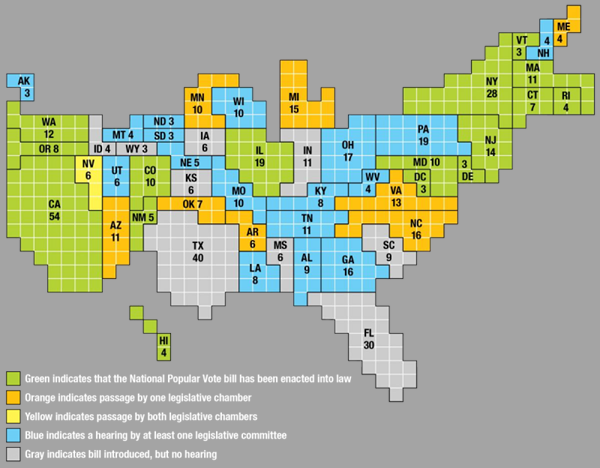 Why are states racing to pass new voting laws?

The Electoral College! Individual states are concerned with their specific outcomes, known as winner-take-all, in presidential elections.

Winner-take-all laws in 48 of 50 states determine that the plurality winner in that state takes ALL the Electors in the state even if it’s only a one vote difference. They don’t concern themselves with the national popular vote (the winner in all 50 states combined).

Only 10-12 states are considered “battleground” states… and worth fighting over. Using this map, if you hover over any of the battleground states, you’ll see why votes in those locations are more important than others: Georgia and Arizona were won by .5% or less, Pennsylvania by 1.2%, Wisconsin by .7%, North Carolina by 1.4%. Ninety percent of all campaigning happens in those few states, but if all votes counted equally, then a larger difference per state wouldn’t matter if it were Red or Blue. Large numbers of voters from both parties are disenfranchised by winner-take-all laws. Examples are Ohio, Virginia, Maine and Texas.

Now you know why both sides are so invested in voting laws that count or don’t count even a small portion of their population. Read more here.

Floridians for National Popular Vote is pleased to announce that Michael Steele will speak at the Lifelong Learning Auditorium at FAU Boca Raton on why the National Popular Vote is such an elegant solution to fairly elect the president while preserving the Electoral College. As he says. “I’m an American, a conservative and a Republican, in that order……”

Be sure to save November 9, 2021 at 2 PM. The event will be in-person as well as recorded for later viewing. Stay tuned for details on how to register.
The event is co-sponsored by Floridians for NPV, League of Women Voters Palm Beach Country, Florida Atlantic University, and FAU Osher Lifelong Learning Institute.

Our Editor is on hiatus for the rest of the summer, so we’ll be resuming our monthly summary of national articles related to the National Popular Vote when she returns. If you see an article or editorial you think we should share, please forward it or a link to it to NPVFL1@gmail.com. For past issues, visit our archive.

Debunking Most Common Myths about a National Popular Vote